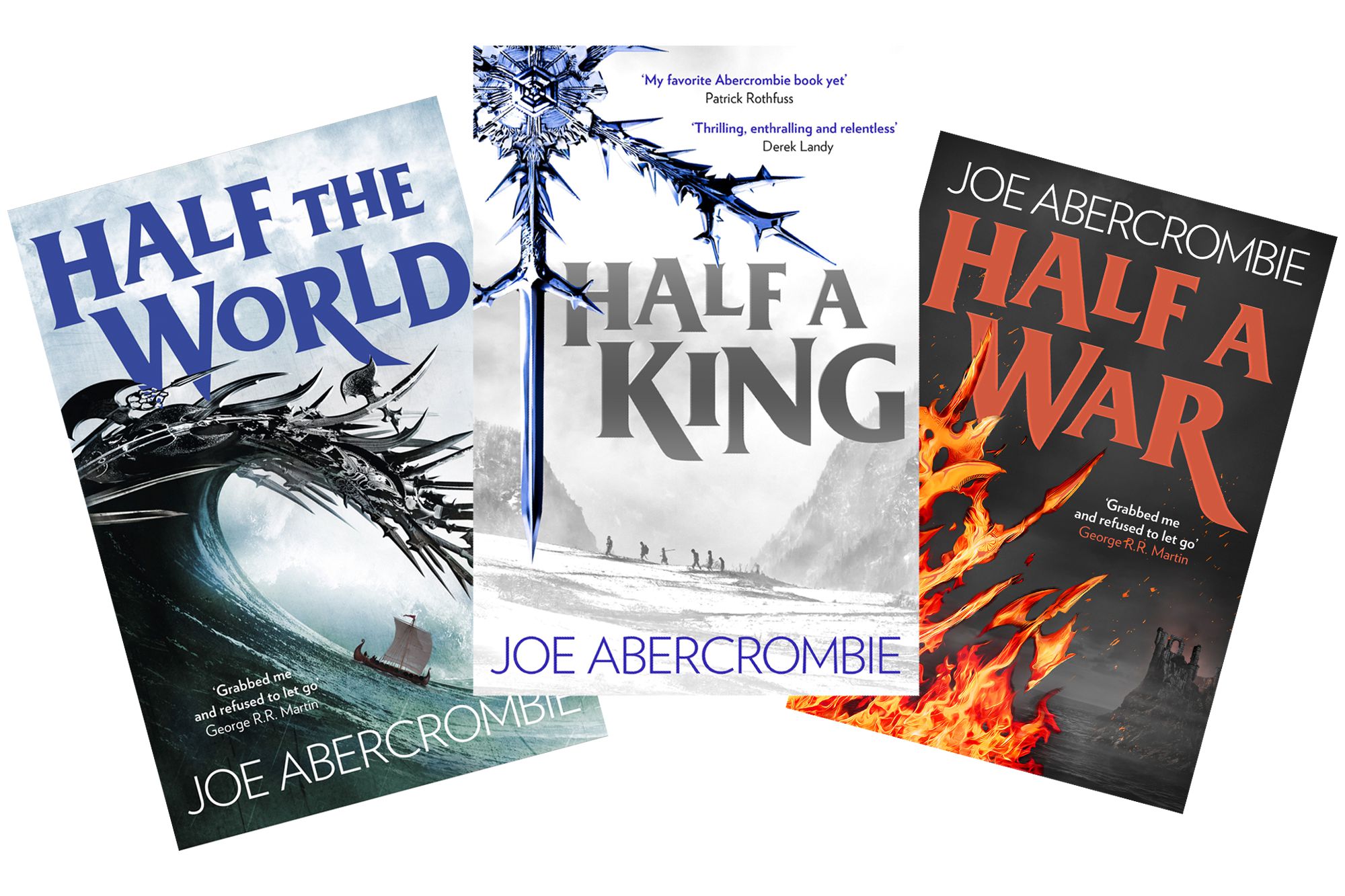 I recently finished reading the Shattered Sea trilogy, by Joe Abercrombie and I wanted to dedicate it a well deserved entry in this blog and write a short review and opinion since I personally would recommend it to anyone.

About the Shattered Sea Trilogy

The Shattered Sea trilogy, written by Joe Abercrombie, introduces us a fantastic world that was once inhabited by the so called Elves, disappeared after the Breaking of God. The trilogy is made of the books Half a King, Half a World and Half a War and tells us the story of charismatic characters such as Yarvi, Thorn and Brand on their travels and wars between different kingdoms.

Joe Abercrombie was clearly inspired by the Vikings for this trilogy and even if it has a generally realistic style, it does include one strong fantastic element: the Elves. Throughout the whole story the author presents us with ancient elvish ruins and cursed relics, and the actual event that caused their extinction, called the Breaking of God.

Although being inspired by the Vikings and having a medieval style, the trilogy seems to be placed at some moment in the future and in a world that could perfectly be ours. In fact, the so called Elves seem to represent us humans, our civilization, with our cities and weapons. These specific weapons from the Elves, as explained in the novels, were the cause of their extinction. All this is reflected in the descriptions and stories that appear in the novels.

Yarvi, the youngest son of the king, was born with a crippled hand. Because of that, instead of training to become a warrior he spent his time studying to become a minister. But the night before entering the wise order of the Ministry, Yarvi receives news that his father and brother have been assassinated. He is the new King.

But after being betrayed and left for dead by his loved ones, Yarvi finds himself alone in an unforgiving world, governed by strength and cold-hearted characters, and accompanied by a group of outcasts, lost souls like himself, he will discover that these companions may be able to help him to become the man he wants to be, and getting revenge.

«I swore an oath to avenge the death of my father. I may be half a man, but I swore a whole oath.»

Thorn Bathu is one of the few girls Gettland who has received the gift of Mother War. Desperate to avenge the death of her father, she lives to fight. But her own fight instructor names her a killer and she becomes an outcast.

She embarks on the ship of the deep-cunning father Yarvi, an extremely astute Minister. Along with the rest of the crew, including Brand, a warrior who hates killing, Thorn will cross half the world looking for allies to fight the ruthless High King, and learn hard lessons on the basis of deception and blood.

Pincess Skara has witnessed everything she loved made blood and ashes. She must overcome grief and terror, sharpen her wits to fight for Throvenland as Queen. Father Yarvi has come a long way and has made allies of his former enemies  and achieved an unstable peace.

But now the ruthless Grandmother Wexen has raised the greatest army since the Elves faced God, and everyone is preparing for the imminent war; including Raith, Grom-gil-Gorm’s Sword Bearer. Some are born to fight, perhaps to die. Others prefer to live in the light. But when Mother War spreads her iron wings, she may cast the whole Shattered Sea into darkness.

In the Shattered Sea trilogy we live through the betrayals, adventures, battles and wars of Yarvi, Brand, Thorn and other important characters of whom we will not want to part with. I personally really like all three books, and even if in my opinion the first one starts a bit weak or slow (something I’ve read online to be the authors purpose), I couldn’t stop reading afterwards.

Each new chapter in these books left me wanting to know what happened afterwards, and in some occasions I had to force myself to put the book down and go to sleep. The characters are very diverse, with very different personalities, great qualities and flaws. Additionally, these characters change across the novels, experiencing changes or evolution in their mood, opinion and attitude which over time make some characters more likable while others become less… agreeable or liked and even hated.

It is a trilogy I can recommend to anyone who likes fantasy, Vikings and a story in which we won’t know what the characters think or will do, creating an enigmatic and mysterious atmosphere.

Flowers for Algernon, by Daniel Keyes.